Last night we went to our first baseball game of the season. We weren't there to support the Hot Rods though. We were there routing for the WKU Hilltoppers! It happened to be one of the few games that the local university team plays at the minor league baseball stadium. So sporting our red we enjoyed a wonderful and absolutely beautiful evening at the ballpark. This year, Seth was intrigued by all the sporadic music and people clapping. He would dance and clap, only he would be about 5 seconds later than everyone else. 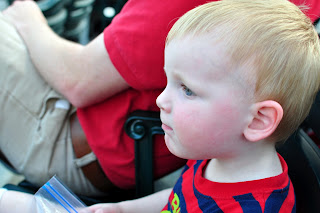 When he wasn't being passed around to all of our new friends in our fellowship group who were sitting all around us, he was snacking on vanilla wafers or fruit snacks or some other food. 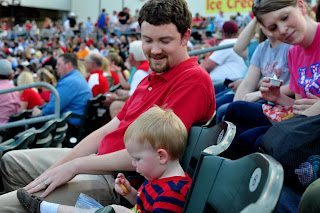 He especially loved admiring his new friend Eliza. They kept giggling at each other and giving each other hugs and kisses. It was just too sweet! 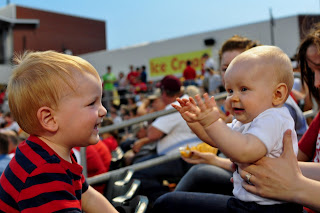 Seth stayed awake during the entire game. Toward the end when it was way past his bedtime, he started to zone out a bit, but as soon as things started getting exciting in the 7th and 8th innings he would perk up to show his support. WKU ended up winning against the University of Kentucky with a score of 11 to 8. Go Hilltoppers!

Posted by Stephanie Tillery at 7:12 AM