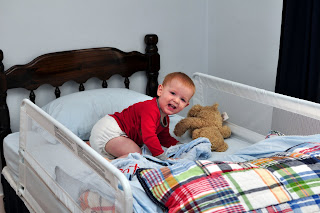 One week ago today we started "Operation: Big Boy Bed." I can't deny the first few days were rough. Seth's new bed is twin sized with Regalo Hide Away Double Sided Bed Rails on it because it could not be pushed up against the wall on one side due to an air vent in the way. His bed is also in a new room with a new look. While it's not quite done because we are waiting on a few items from Etsy and IKEA, it was ready enough to transition Seth over to sleeping in his new bed. That would give us close to five months of getting settled into sleeping in a new room in a new bed before "little" arrives where we will all have to make many new adjustments to our routine.
When Seth was four months old, we decided we would establish a bedtime routine. That was easy compared to transitioning to a big boy bed because with a crib, kids are confined. Our biggest issue this past week has been Seth getting out of his bed over and over again. He was even waking up in the middle of the night which he usually doesn't do. Oddly enough nap time had not been much of a struggle. So we just kept wondering why bedtime was so difficult. It wasn't until a couple of days ago that we realized our mistake. We had changed too much. We were still taking a bath, putting on pajamas, and reading on the new bed each night, but one key component was missing. The rocking/cuddle time had been eliminated because the rocker is still in the nursery. I only rocked Seth for a few minutes anyway and he was usually still awake when I laid him in bed so I didn't think it was too important in the whole bedtime process, but I guess he needed that winding down time. Two nights ago we added that couple of minutes of rocking back into the routine and Seth has been going to sleep just fine and he is back to sleeping through the night again. I am hoping that the trend will continue and just in case it doesn't, I sure am thankful that we have several months to work on learning how to sleep.
Posted by Stephanie Tillery at 6:57 AM