Adding to our Flock

This whole chicken raising thing is pretty discouraging right now. With the loss of two chickens, we decided that we needed to order more from a different hatchery that allowed shipments of less than 5. All of our egg calculations were based on four chickens and it just wasn't going to be cost efficient to have only three. So we ordered three more last Friday. We ordered two Black Australorps and one Easter Egger. We had to have a minimum order of three so we chose the Australorps for their high production quality/friendliness and the Easter Egger just for fun (they lay pastel bluish eggs).
Today was the day they were going to arrive! I had been following the birds via their tracking number on the package, so I knew they arrived at the post office this morning. I got the call around 8 that they were ready for pick-up.

Wednesday mornings I observe pre-service teachers at The Learning Center so things are rushed around our house. I didn't have time to check on our chickens in the coop until I was heading to the car... and THERE WERE ONLY TWO. Either someone is being very mean or we have a really big snake around here. I left the house devastated.

I picked up our new batch of chicks at the post office. The man at the post office was not very encouraging. He told me it was the worst time to try to get chicks and that he hoped they were alive. He said they weren't chirping very much. Thanks, Mr. Post Office man for making me feel even worse!

The chicks were indeed chirping so I felt relieved. At home, we opened our box just like we did a little over a month ago and we saw the cutest black and yellow chicks. But there were only two! The hatchery forgot to pack the Easter Egger! 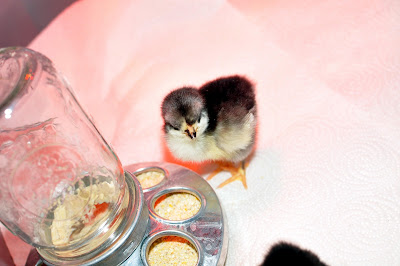 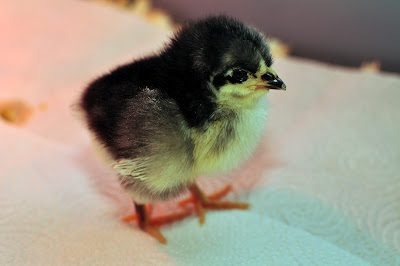 After calling the hatchery, they told me to wait until Friday to make sure the two Black Australorps survive. If they do, I can get the Easter Egger and two other chicks of my choosing sent to me with free shipping. Chicks are really cheap, but shipping them isn't, so I was thankful to hear the shipping would be free. If more chicks are sent next week that will give us 7 chickens, assuming we can keep them all safe. It sounds like a lot, but thankfully we have the square footage for them. Now it's time for some snake proofing and some possible surveillance!
Posted by Stephanie Tillery at 12:28 PM