One of the Tough Days

Being a parent can be tough. Yesterday was especially tough and also stressful. Seth had been having some trouble with his teeth, and after having his first dental exam a couple of weeks ago, we learned he needed to be put under anesthesia to fix some of his problems. I had been beating myself up about being a bad parent and wondering how in the world could our sweet boy go from everything being fine to all of a sudden having a mouth full of cavities? I was so ashamed I couldn't even take Seth to the dentist. Bryan had to do it. Well, we found out it that Seth has a genetic problem where he was pretty much doomed to get lots of cavities even with our brushing from the moment he got his first two teeth. We had to "fix it and move on" as our dentist kindly explained. We will have to be very diligent about not letting Seth drink juice or milk in between meals, only water. He has to brush two times a day and later when he learns how to spit without swallowing he will have to use prescription toothpaste. Hopefully later his permanent teeth will come in and not need as much protection as his baby teeth.
Originally Seth was supposed to have the corrective dental work done of the 31st but we got a call late Thursday evening wondering if we could do it on Monday, that is if we could fit in a physical on Friday. We made it all happen and we arrived very early at the hospital yesterday morning. Bryan did all the hard work by going back with Seth for all the prepping while I stayed out in the waiting room with Silas. I held it together pretty well until this little old lady that volunteered at the hospital offered to stay with Silas so that I could go back and join Bryan and Seth. I teared up and told her I just couldn't do it. I didn't want Seth to see me upset because I knew it would just make him upset. She obviously felt bad about making me cry and stayed and comforted me for a while. Almost three hours after we arrived they started the procedure. Two and a half hours after that we got a call that Seth was headed to recovery. After conferencing with the dentist, we thankfully learned that Seth got to keep all four top front teeth. Because those teeth are so thin, it is hard to fill a cavity on them if the cavity is too big. The dentist was unsure of whether he would be able to keep them or not before going in. To be honest that was my biggest fear out of everything. I just didn't want Seth to have to go around without his top teeth for the next five or more years. But they were fixable and we took a big sigh of relief. After fixing 16 teeth in all and sealing them to help prevent future cavities, we thanked our dentist and then finally got to see Seth.
He was in pain and hated the IV in his arm, but after a minute or two he calmed down and drifted off to sleep in the holding area where you have to stay right before leaving from outpatient procedures. Because he actually had an ear infection and cold-like symptoms during his physical he had been placed on antibiotics. Everyone knew that going into the surgery and felt that he would be fine during the procedure, but afterward as he was sleeping he was having trouble breathing. It was like he had a lot of drainage clogged in his throat and upper chest. We tried and tried to get him to cough but because he had a tube down his throat during the dental work, it was sore and he wanted to do anything else but cough. So they decided to do a chest x-ray and because the picture wasn't very clear they had to do another one. By that time Seth had woken up and was eating jello and Popsicles and his breathing seemed back to normal. After the chest x-ray confirmed he had no fluid in his lungs and the nurses monitored him for a while longer we finally got the ok to go home.
Seth went to bed a little earlier than normal but woke up bright and early this morning as if nothing ever happened. He has been going strong all day making lots of messes and having fun. Watching him play makes me thankful that the tough days only come around every so often. 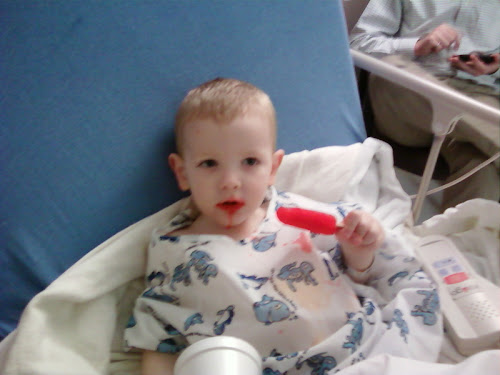 (taken with my phone just before leaving)
Posted by Stephanie Tillery at 1:36 PM