Friday evening the snow rolled into Bowling Green. We ended up getting between 6 and 7 inches at our house which was actually the second snowfall that we have had this winter. A few weeks ago, we had a light snow and didn't get a chance to let Seth experience it then. I don't know what we were thinking! 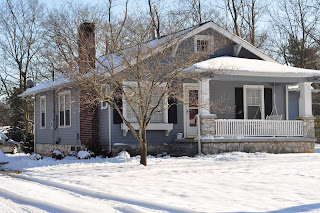 So this time around, we wanted to document the experience. Bryan decided (before letting me know) that he was going to walk out on the front porch and let Seth feel the snow really quick (no kidding it was less than 20 seconds probably, so don't get too worried about Seth not being bundled up). I grabbed the camera as fast as I could and this is what I caught. Seth was not so fond of the the freezing cold white stuff. I have a feeling he will enjoy it more as he gets older. 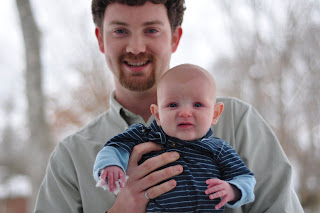 A little while later, we tried touching the snow again with Seth sporting his cute winter hat. He still wasn't so sure about it, but at least he was willing to touch a snowball. 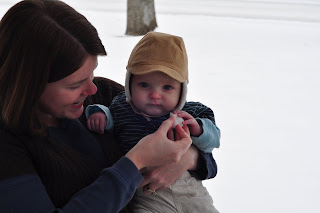 Posted by Stephanie Tillery at 7:25 PM