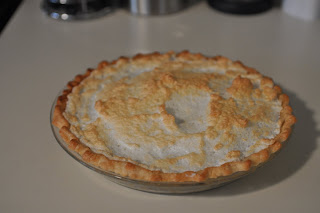 My First Chocolate Pie
A couple of years ago, I was given an assignment to write a personal version of the poem Where I'm From by George Ella Lyon. The beginning of mine went something like this:

where I'm from
by: Stephanie Tillery

I am from chocolate pie,

from cornbread and West Tennessee barbeque,

filled with warmth and love.

I am from Grandma's blue hydrangeas,

the backyard apples trees, and the fuzzy pine planted

in the first few days of Kindergarten.

As you can see, chocolate pie has been a big part of my life. My dad is the chocolate pie maker in our family. Let me just go ahead and say it, no one and I mean no one else can make a chocolate pie as good as him. Well, I decided that I would try my hand at making a chocolate pie today using my dad's recipe that he so graciously shared with me the last time we were down to visit. I have seen my dad make a few chocolate pies in my lifetime. It wouldn't be too hard to replicate that chocolate goodness, or so I thought...
First, I only had a store bought rolled up frozen pie crust. I didn't let it properly thaw before trying to unroll it, so it cracked all to pieces which resulted in a very ugly pie crust and some of my edges browned too much while it was baking. Then, my chocolate took forever and I mean forever to slightly thicken using a double boiler which I insisted on trying since the original recipe called for that, even though my dad doesn't do it that way. I should have known better. For crying out loud, why didn't I just do it like my dad does it? I ended up dumping my chocolate into a regular pot and doing it like he does it after thirty minutes of stirring and finally it started to thicken. All the while I had my egg whites whipping in the stand mixer for the meringue. I am not sure what went wrong with them, but they ended up so not like my dad's. Maybe over mixing? Maybe it just wasn't his magic touch? I'm not giving up trying to make a good chocolate pie, but I know one thing for sure, I am going to have to do some major practicing to ever make a chocolate pie as good as my dad's.

Posted by Stephanie Tillery at 2:13 PM