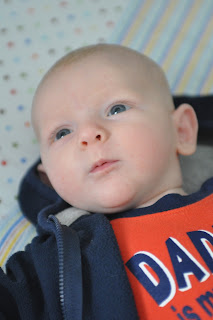 Today Seth went in for his two month check-up and the first round of vaccines. We had an excellent report. He is a healthy and growing baby boy. Seth is up to a whopping 9 pounds and 14 ounces and he is 22 inches long. He was so happy during the exam and he even smiled at the doctor. When it came time for the shots he screamed bloody murder for about five seconds and then he was back to normal. I think I had a harder time than he did. As many of you know, I have a fear of needles and thorns of all kinds and it was so incredibly hard for me to see my baby boy being stuck with three sharp needles. That whole maternal instinct thing has really kicked in I think.
Seth will be starting a vitamin drop tomorrow and he can now take Baby Tylenol. I was told to give him some as soon as we got home to help ease the discomfort from the vaccines. Baby Tylenol was something I didn't think to get before today though. So on our way home we had to make a stop at Walgreens. (For all of you out there that have little ones on the way, make sure you put that on your list of things to buy.) We made it home and although the doctor said Seth could be very fussy, he hasn't been yet. He has mostly slept. It could be a long night, but if that means just holding my baby boy all night, I will gladly do it. He is only two months old once after all.
Speaking of sleeping, Seth has moved into his own room now. He started sleeping five or six hours at a time last week and we thought that was the perfect time to transition him to his own bedroom. Since we have done that I have only had to wake up one time each night to feed him. It only took 8 weeks for him to really realize people are supposed to sleep more at night than during the day. :)
In developmental news, our little man is smiling and giggling. He is not only smiling though, he is smiling back at us if we smile first. It is so exciting! He has just started the giggling and it just sounds like little happy grunts right now, not really continuous giggles, but it is such a beautiful sound regardless. He loves to try to hit objects and he really loves his new Tiny Love Classical Mobile. After noticing his fascination with the ceiling fan, we did some research and found this wonderful mobile. Seth loves it!
I tried getting a video of him last week when he just started with the giggles. I'm sorry it's sideways, I will try to get a better video in the next few days. I will know not to turn the camera next time. Excuse the hiccups, too. :)

Posted by Stephanie Tillery at 5:39 PM