If you had told me a few years ago that I would one day own chickens, I'm not sure I would have believed you. We have been tossing around the idea of raising our own backyard chickens (yes, right here in the middle of the city) for the last few months and then after switching to Paleo, it just made sense to us. We eat a lot of eggs. The eggs that we buy aren't exactly cheap. So we started researching and calculating. Bryan figured up for us (and has a fancy spreadsheet with a corresponding graph to go along with it) that if we could own chickens for at least 60 weeks after they begin laying eggs (which is around 5 months old), we would pay for the expense of the coop, the cost of the chickens and supplies, and begin getting eggs for less that what we are paying for them now. I love having a husband that is an engineer!
After spending some time figuring everything up and deciding we did in fact want to raise chickens, we had to decide what breed we wanted. We also had to figure out where we were going to get them and where we were going to get the organic feed that we wanted them to have.
We decided on Buff Orpingtons because of their docile nature (a breed that's supposed to be good around kids and as backyard chickens) and the fact that they are supposed to be good layers/meat birds.
There are only a few hatcheries that allow shipments of small quantities of birds so we had to do quite a bit of researching to figure out how we were going to get the breed we wanted. We ordered our girls from Cackle Hatchery. Our chicks were shipped out Monday morning just shortly after they hatched from their eggs. They were packed securely in a ventilated cardboard box. They arrived at the post office this morning and we got a call letting us know they were ready for pick-up. 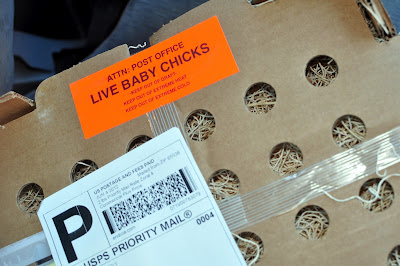 We ordered five chickens and they had the sweetest little chirps coming from their box. We all anxiously opened the box and all five chickens had survived the trip. It is not uncommon at all for some chicks to die in transit, so we were thrilled that they all made it. 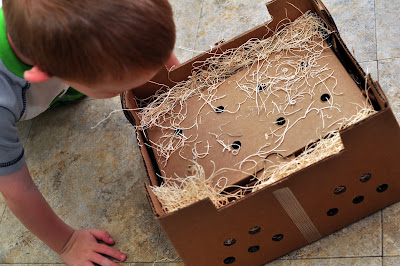 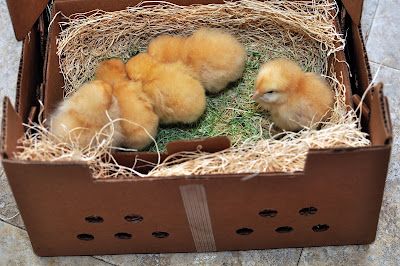 We quickly moved them to their brooder box which will be their home for the next 4 to 5 weeks. After that they will move into their coop (which is being built and will be delivered soon) in the backyard. 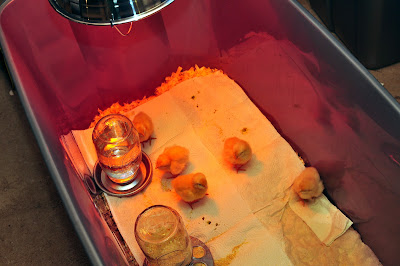 I dipped their beaks in the water just like my instructions told me to do and they soon discovered the water and the food. We are giving our girls organic chicken feed which we thankfully can purchase from River Cottage Farm here in BG. We buy our eggs from them currently, so we know their eggs taste good and are healthy. We also plan to feed our girls our organic food scraps and some flax seed. 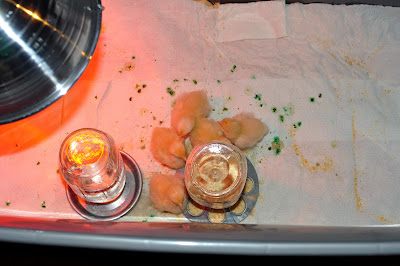 After they had been eating for a few minutes their chirps died down and they seemed to grow more content in their surroundings. The brooder lamp seems to be keeping them plenty warm and in a couple  of days we will remove the paper towels that are covering the pine shavings in their box. (Paper towels keep them from slipping right now.) Our instructions and everything I have read says to leave them alone for the first day so that is exactly what we did. 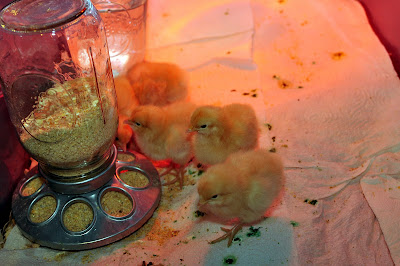 Tomorrow we start handling them though because we need these girls to be friendly and familiar with people.
So our chicken adventure begins...
Posted by Stephanie Tillery at 10:00 PM