Tantrums: A New Realm of Parenting

This train table was the cause of Seth's first full blown tantrum. 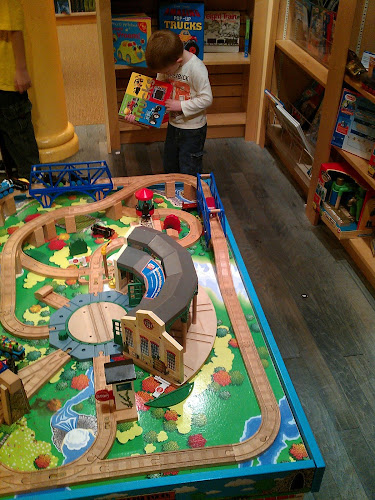 I decided I would take the boys to story time at Barnes and Noble yesterday. The previous Friday we had gone to story time, but I had my mom with me so one of us could tend to Silas while the other sat by Seth. They had warm hot chocolate for the kids in these tiny kid-sized cups. The Snowy Day was read aloud and we even made a snowman craft. We had so much fun and it went so well I thought we would try it again this week. We didn't even notice the train table on the opposite side of the store.
I thought the story time started at 11:00 this week because that was the time printed in the SOKY Happenings magazine. We showed up at about 10:50 so that we could get inside and settled into a spot before the story began. When 11:00 rolled around and we were the only ones in the children's section, we decided we would take a look at some books and then just go home. As we were casually browsing around, Seth spotted the train table. Right about that time, Silas decided he was hungry. Seth played and played with the trains while I was able to feed Silas. It worked out perfectly really. Right at 11:30 an announcement came over the intercom that story time was about to begin. Excitedly, I tried to persuade Seth it was time to go listen to the story. He didn't want any part of it. He wanted to stay with the train and he made it very clear. Not wanting to make a scene in front of several other people that had shown up for story time, I tried to pull Seth over to the side and talk about how we had to leave the train and go listen to the story. Once the crying began I knew I was doomed. The crying soon escalated into a going-limp-fall-on-the-floor kind of tantrum. There was no negotiating. We had to get out of there and fast. I had Silas in his carrier in one hand and I literally had to drag Seth from the back of the store to the front. Once we got to the car the crying continued all the way home.
Dealing with a two year old can be very challenging. My firsts thoughts leaving the store were we are never going back to story time there ever again. Call me crazy, but after I had some time to think about what happened I knew we needed to try it again. Luckily our Barnes and Noble has a story time on Saturdays, too. So today Bryan joined us just in case the same thing happened again. We did A LOT of talking about story time and leaving the train when mommy and daddy said to leave it before we went. We even practiced saying bye, bye to the train before we went inside. We walked straight to the story area, listened to the story, and even made a snowflake. Afterward we played with the train. Seth even looked at some books instead of playing with the train the whole time. When we were ready to leave we told the train bye, bye and walked to the front of the store. Bryan took both boys out to the car while I bought a half-priced Christmas book. Seth did get upset for a second on the way to the car, but we were able to avoid any meltdowns this time.
So we have entered a new realm of parenting and it's definitely a learning process. Obviously we won't have an opportunity to have a redo with future tantrums, but I sure was thankful for one this first time.
Posted by Stephanie Tillery at 6:23 PM