Sometimes a project just doesn't turn out the way that you plan. Bryan mentioned a few days before Seth turned six months old that he wanted to start a growth chart. I hadn't really thought about starting one so soon (I don't know why), but it was a great idea. So trying to be crafty, I set out to make a growth chart. I had seen a few before that were super cute and I thought how hard could it be? Well, folks, there is a reason that they are forty plus dollars on Etsy. A growth chart is hard to paint and when I realized that I should have used paint pens instead of actual paints, the cost was going to be too much. So we decided to go a different route and seek a little help. We did turn to Etsy, but in a much cheaper way. Ditching the old work in progress, we came up with this...

a giant ruler.
Once we changed gears, Bryan took over the project wholeheartedly. He picked out the board, oiled it, and applied the vinyl to it. We think it turned out great and better than we had planned.
We plan to measure Seth every six months or so to track his growth. 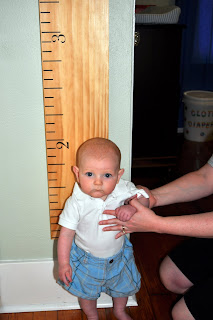 6 months old= 25 inches
(although it was a little hard to see that from this angle)
Posted by Stephanie Tillery at 7:27 PM