Bryan and I discussed getting Seth a swing set as he was approaching his first birthday. We talked ourselves out of it when we thought of the money we would be investing in something that was a million times nicer right down the street at the local park. We love the parks and we also love the social opportunities they provide. So we opted for a wagon instead and we felt good about our decision to not invest in a swing set.
While we were enjoying our fiesta outside the other night, Bryan asked if I would like to have a free swing set if we would go get it from his boss' house. Not really knowing what it looked like, the condition it was in, or really anything about it for that matter, I kind of hesitated a little. I mean we had just decided a couple of months ago we would just go to the park if we wanted to play. Since it was being offered to us though we decided to drive out to look at it, and boy, was I shocked to see what we would be getting! This wasn't just a swing set, it was a huge wooden structure that would usually cost lots and lots of money. We were getting it for FREE! Bryan's boss' kids are too big to play on it and he hates mowing around it so all we had to do was go pick it up. That was easier said than done, but after a weekend of disassembling, moving, and then reassembling, we have it in our backyard and we just feel so blessed. We will still be going to the park, but this generous gift will be sure to provide lots and lots of hours of play, too.

The structure has a spiral slide, two swings, a seesaw, a climbing rope, rock climbing wall, and a play area on top, and what looks to be like a little picnic table/climbing area underneath the upper level. 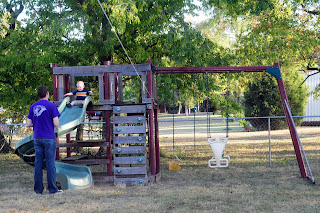 Seth on the SeeSaw 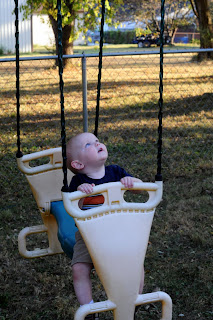 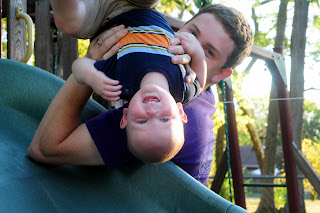 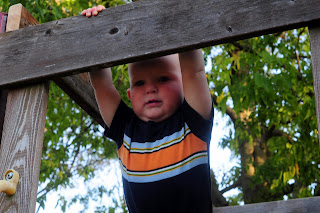 Trying to figure out the Climbing Rope 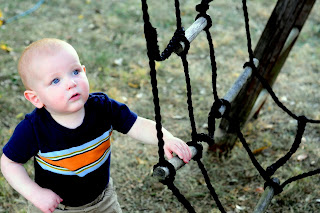 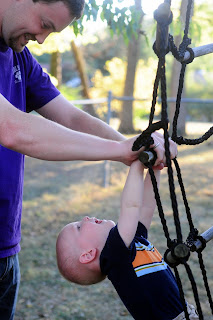 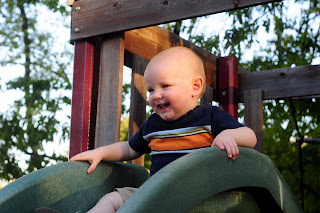 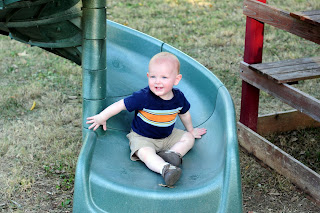 Playing Peek-a-boo on the Slide 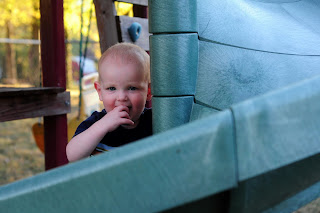 Posted by Stephanie Tillery at 5:39 PM