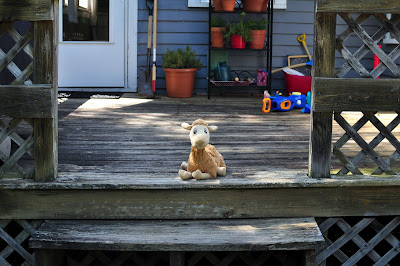 I would have never imagined when I purchased a stuffed llama from Kohl's for Read for the Record Day last year that this stuffed animal would become so important. Most kids have teddy bears or puppy dogs or bunnies that are their cherished stuff animal. Seth's is a llama. He doesn't have a name. He is just known as llama, but he is super important in Seth's world. Llama sleeps with him, travels on trips with him, gets toted around the house, and is loved dearly by Seth.
This afternoon I took a load of clothes out to the clothesline, but forgot the clothespins. When I headed back into the house to grab them, this is what I saw. I asked Seth, who was out playing in the yard, why llama was outside and he said because llama wanted to watch him play. So llama sat and watched him play.
Posted by Stephanie Tillery at 7:34 PM